A part of empties

There is really only energy in the world. The energy that exists in space, in the body, and in things. As in the Buddhist doctrine of “color equals emptiness,” all things are not solid, but rather energy is unevenly distributed and solidified, taking the form of bodies and objects, drifting and accumulating without solidifying into a form. Okamoto has developed this view of the world as he has continued to think through the “movement of energy” in juggling.

Objects and bodies are nothing more than forms in front of the flow of energy, and it is when these forms interact with each other that the “flow of energy” is born. It is a phenomenon that appears when various physical elements are combined in a complex but simple, logical, and inevitable manner, such as the flow of water and wind, or the movement of a school of fish.

In today’s world, where information and its noise abound like a torrent, we must constantly continue to prove the inevitability of our existence. Okamoto believes that in such an age, simply feeling the simplicity of order and remembering that even the human body is in fact only a part of that greater order should lead to the affirmation of existence.

The most primitive relationship that occurs between two forms is “energy transfer.

There are moments when I suddenly feel the beauty of the relationship between body and object. When you receive an object that is thrown to you as if it were being sucked into your hand, or when you run a pen through the air and it draws a smooth line with no effort at all. It is a moment when some principle of motion is established without excess or deficiency. This movement of energy is not a “physical law of random nature” like, for example, the shape of a leaf vein or the trajectory of a raindrop, and the experience of viewing it is different from some kind of artificial or mechanical aesthetic sensation, such as seeing a well-proportioned figure. It is a “physical feeling” that emerges when the shapes and quirks of the human body, the shapes of objects, and the laws of physics are in harmony.

Juggling is a technique that controls these three aspects of the human body, objects, and physical laws. The tools often used are primitive objects such as points, lines, and rings, and sometimes even the body is treated as a “form. The root of the juggling technique lies in the most abstract way of “transferring energy between objects and bodies. In this work, the challenge is to use computer graphics techniques to capture the “physical pleasure that arises in the connection between body and object.

To look at an object and connect with it according to its traits and inherent energy.

The sensations and memories that arise during this connection strongly evoke the “need for the body. This reality affirms “one’s own certain existence in the world” for people who are exhausted by the torrent of information. Okamoto has learned how to fight against such despair through juggling (i.e., the search for a relationship between objects and the body), which he has continued for many years.

The physical sensations and memories triggered by the connection with objects. In this work, Magnetic Sea, the focus is strongly on this “memory. It is not “so-called juggling tools” that are used. The objects on stage are fans, videotapes, fluorescent lights, and other “things” that are no longer in use. Things that have finished their roles and are about to be forgotten are, therefore, deeply imbued with people’s senses and memories. Okamoto attempts to connect with such objects with the perspective he has cultivated through juggling, and to evoke a higher density of reality. 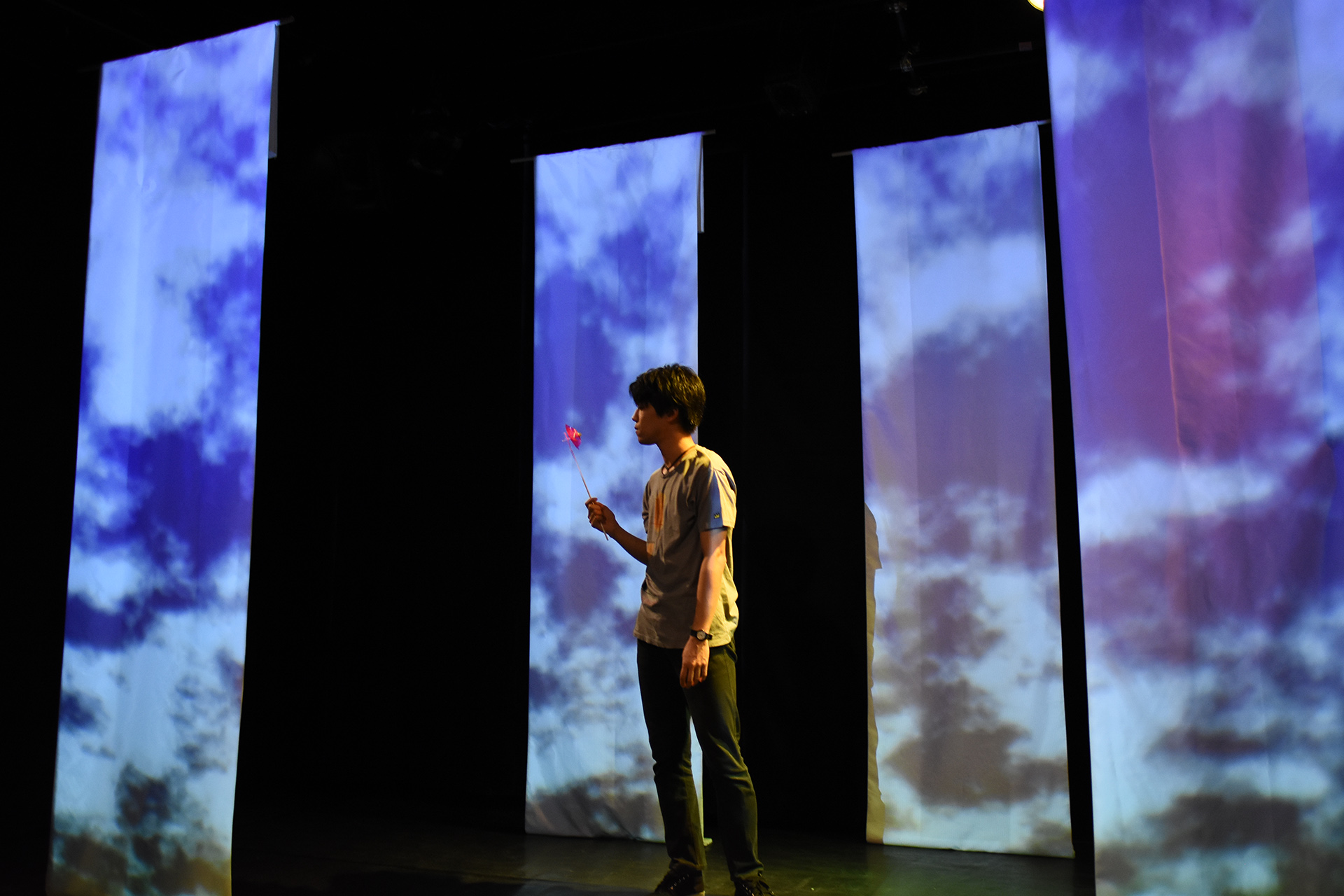 What triggers that movement?” Why does the body move the way it does?” These were the questions that Okamoto, who at the time was trying to broaden his focus from juggling to “create visuals that evoke emotions through movement,” held strongly.

Okamoto, who was assigned to live in Hitachi Taga City, Ibaraki Prefecture, as a resident artist, searched for “stimuli that would serve as a source of movement generation” in order to sublimate his role as a resident artist and the challenges he would face. One of the things he often heard from local residents was the case of a large chimney collapse in the city of Hitachi-Taga. The structure was the tallest in the world at the time, protecting the city from smoke damage, and was a symbol of the community when it collapsed at the end of its life. It seemed to me that there were various dynamics at work, including differences in temperature between generations.

The stories about it were collected from local residents, and the audio data was randomly played back from four radios placed on the stage. Based on the voice quality, tone of voice, and content of the stories, parameters such as intensity and speed of movement, shape of movement, physical condition, and emotion were set and choreographed.

His stance on choreography has remained consistent since that time: “Movement is not generated internally, but is only triggered by information and energy that comes from the outside. The 40-minute showcase “Echoed Body” was created around this performance.

The “qualia” (sensory qualities) that are ingrained in objects, such as nostalgia, sadness, and tenderness, can be elicited and expanded by choosing how to interact with them.

The movements usually performed in juggling, such as throwing, pinching, dropping, biting, and placing, are an “affordance approach” to objects, as they are based on the “shape” of the object. However, windmills, for example, have qualia (sensory qualities) such as “innocence” and “eeriness,” and there are approaches to things that are conceived from these qualia. A person holding a windmill with both hands and gazing at it as if it were precious could emphasize its “innocence” and “eeriness.

Okamoto, who has been experimenting with ways of interacting with objects through juggling, knows that there is also an action that is “affordantly new, and that also draws out the sensory quality of the object. In the aforementioned windmill example, “innocence” and “eeriness” may be emphasized by the act of “carefully disassembling the wings and arranging the parts,” rather than by the act of holding or staring at the windmill as if it were precious. What Okamoto has cultivated through juggling is a sense of such things. It is simply a matter of superimposing the memory of the object and my memory of it once again from a new perspective.

For Okamoto, who has continued to think deeply about juggling, juggling is not just an acrobatic technique, but has been elevated to “a perspective that considers the relationship between things and the body.

It is not just about things, not just about the body, but about the need for a relationship between both. The space is not a “point” where only the body and objects are in relation to the space, but a line where these two or more elements are connected, and the movement of the line creates a “space” for the viewer. In this way, juggling is more likely to create the perception of “space” than other genres of performing arts. And that space changes in texture depending on the movement of objects and bodies.

Okamoto began to believe in this power and created this work.

In this work, four screens are placed on the stage. By projecting fragmented images on the four screens, Okamoto aimed to create a projection of the viewer’s own memories, which would be supplemented by the viewer’s imagination. Furthermore, by overlaying the texture of the relationship between objects and the body on top of the images, the artist attempted to create a “landscape that is known but unknown” by altering the viewer’s memory.